The answer may surprise you

I recently read this article by the Christensen Institute. The article is based on their own research on the topic, WILL SCHOOLS CHANGE FOREVER? Predicting how two pandemics could catalyze lasting innovation in public schools BY CHELSEA WAITE & THOMAS ARNETT FALL 2020.

The comparison to the Sputnik launch and its implications to education in the Us is not new. Sputnik’s blow to American confidence and security offered fertile ground for new reforms designed to make sure US students were competitive with their Soviet counterparts. As a reaction to this scare from Russia came a new wave of advocacy rapidly eclipsed them by pressing for more rigorous and advanced academic preparation in science and mathematics. Another example given in this post is an outbreak of polio in Chicago closed the city’s schools and prompted remote learning for three weeks. Did these significant moments change education? No, because It didn’t square with how teachers were used to instructing students. The question then is; is that different now?

What’s critical for school leaders, policymakers, and funders to understand is that the forces at work only create a potential crucible moment. External circumstances are certainly forcing schools to adapt right now. But whether these short-term adaptations convert into long-lasting changes that benefit students has more to do with the chemistry between schools’ external circumstances and their existing ways of doing business. 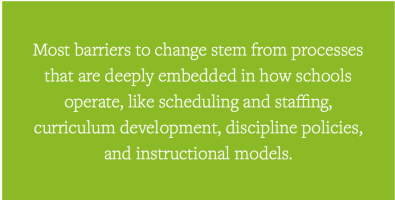 An example of how new resources not necessarily will change what goes on in school is this;

“Computers ‘do not improve’ pupil results, says OECD.”32 The referenced report rankled the edtech community by finding that more frequent computer use in schools was associated with lower results.33 The Organisation for Economic Co-operation and Development (OECD) designed the study to evaluate the impact of a resource—computers—on school’s capabilities, but did not take into account the variety of processes by which teachers used computers in their classrooms. As a result, the study’s findings are unsurprising: adding more resources has the least potential to fundamentally transform how schools operate.

In contrast, when educators integrate new resources—such as technology— with new processes, those resources can have a powerful impact on a school’s capabilities.  It is important to remember that you have to look at the expected value outcomes required of the school. If the new processes do not do a  good job at delivering expected value, they are unlikely to stick around.

Lindsay Unified School District, a small district in rural California, stands out as an example of a school system that installed new processes by beating old ones on existing metrics of performance. The district is well-known for having replaced lock-step student learning with a competency-based model. Prior to undertaking this transformation, the district’s overall Academic Performance Index (API) scores were some of the lowest in California, graduation rates were in the low 70th percentile of California districts, and annual teacher turnover was above 50%.41 With these results, it wasn’t hard to find broad consensus among stakeholders that the district’s existing processes were failing.

This failure, however, opened the door for a decade of work to redesign processes. The changes persisted because, in addition to offering new benefits like customized pacing and student ownership of learning, the new processes also proved more effective at delivering what stakeholders expected: test scores, graduation rates, and college admissions.43 Over a four-year period, the percentage of Lindsay’s students who reached proficiency on state end-of-year exams nearly doubled, and its graduation rate jumped to 94%. More info about the school. Forbes article. The Hechinger report

Blended learning, which has long shown potential to enable schools to help every student succeed by differentiating instruction at scale and offering insight into individual student progress, is especially relevant as schools wrestle with complete or partial closures.46 Going forward, educators and entrepreneurs will likely develop and adopt other new processes that not only address critical issues during the pandemic, but show potential to make education more equitable, relevant, and empowering.

Making change in schools has always been—and remains—difficult work. Schools’ existing models are powerful normative forces that work to preserve themselves, even when external circumstances force changes upon them. Left on their own, many of the changes that leaders introduce during this time of upheaval are likely to either conform to schools’ existing models, or fade away once the COVID-19 pandemic ends.

To make a lasting change we need to think about what we would like to preserve, why and how. We need to talk to the teachers and the students. I am sure that there will be a lasting change in how we regard technology now. How it helps us in our day to day life and learning. How we can easily meet in Teams and Zoom and how we can cooperate and collaborate. We define learning as the transformative process of taking in information that—when internalized and mixed with what we have experienced—changes what we know and builds on what we do. It’s based on input, process, and reflection. It is what changes us.”