This week we invested in two sets of VR glasses for our school. We will be exploring different uses of this, ranging from a meeting point for students who would like to meet up during the breaks, to educational areas. I am enclosing an article from CNN that discusses the possibilities here.

(CNN)Imagine instead of viewing a shark-infested shipwreck or a space station in photos, technology meant you actually swam and floated right through them.Now, students are immersed under the water and into imaginary spacesuits to experience life as explorers and astronauts, if only for a few minutes. Virtual reality (VR) is entering classrooms around the world and taking pupils on field trips to the most inaccessible corners of the planet. As students move their heads left and right and up and down in order to navigate an area from all angles, it’s never been easier to put oneself into a virtual world that amplifies and improves the learning experience.

Among the applications available is Google Expeditions, which has been used by over one million students in the UK as part of their Pioneer Program, and another one million children globally.“It’s basically a personal field trip app,” says Ben Schrom, product manager of Google Expeditions. “It facilitates the teacher taking his or her students on a VR trip to a place or set of different places,” he said of the app that’s free to download on iOS and Android.Users attach low-cost cardboard headsets, which cost roughly $15, to their smartphones.“In one class students can actively explore Machu Picchu and in the next they can explore the inside of the human bloodstream,” adds Schrom.Another shows a rocket launch which physics teachers can use to explain the forces at work there.The aim is to provide a tool that can fit into the curriculum, Schrom says.“We created a teaching tool as something that could supplement and augment the lessons that are already happening in the classroom,” added Schrom.“We set out to build a really powerful tool to open kids’ eyes and catalyze their curiosity of whatever the topic at hand,” he said.There are lesson materials available through the Times Educational Supplement, an online platform where teachers find resources. Students can learn about the challenges astronauts face. Shailey Minocha, professor of learning technologies and social computing at the Open University, has been researching the use of 3D and virtual worlds since 2008. Her team has visited schools over the past year as part of a Google-funded study of the effects of VR tools in education. Using workshops and interviews the team has spoken to around 700 children and educators in the UK. Among expeditions is a trip to the International Space Station, where students can get a glimpse of what life is like in space. “They were putting themselves in the shoes of the astronauts up there,” Minocha adds.

Though it’s still early days to know what impact VR will have on students, Minocha says researchers have found that students are more analytical after using it.

“As students grow older they find it difficult to ask the right questions in the class. We wanted to see if Google Expeditions with this VR app can enable students to think more critically and ask better questions,” says Minocha. What she found was that a higher number of more complex and analytical questions were being asked by students who used technology in addition to pictures, texts, or newspaper articles. This was the case both in the classroom and out on real field trips. “Because if they have used these to prepare for the field trip they were more prepared and more likely to ask more inquisitive questions,” she said. They also found that it could boost engagement, especially for students with teaching assistants and those who have special needs. “They were much more vocal and participated in the class,” Minocha said. Another application is Discovery VR. Like Google Expedition, it’s free to download and can be used with cardboard headsets. More and more VR apps are being developed for smartphones, says Minocha. “Virtual reality has been around for 20-25 years, but I think it has reached a point now where the adoption is much quicker than ever before.” The Discovery VR app has been downloaded nearly four million times, says Chris Nash, head of community at Discovery Education UK. He has seen that some schools in the UK get around the costs by asking the parents to donate their old smartphones.

The teacher can guide the lesson through the use of a tablet. Geography students at King’s Ely, an independent school in Cambridgeshire, UK, took a tour to the depths of the oceans earlier this year to explore the effects of coral bleaching. The sessions were part of the Open University research project and looked at how VR might improve questioning among the students in year seven or eight (11 and 12-year-olds). 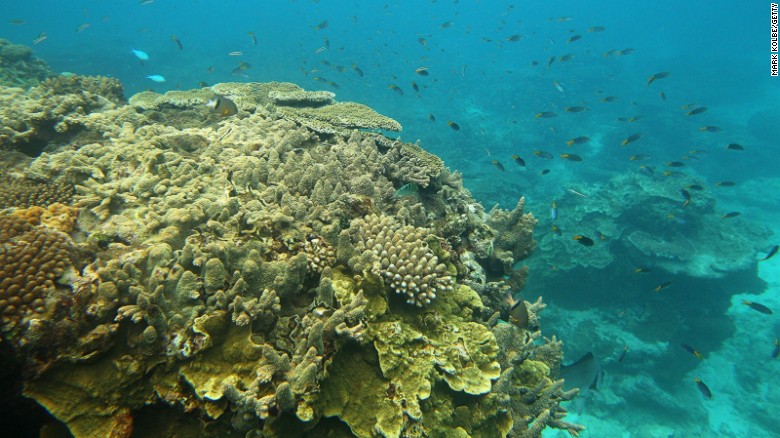 The students used virtual reality to learn about coral bleaching.
“Some were lying on the floor as they looked at the corals. There was a lot of instant reaction. It was almost as if they were there, from their perspective,” says Alan Parkinson, head of geography at King’s Ely Junior, who held the class.
“I selected the particular images they could see. All the students saw the same images, but obviously the direction they were looking at could be different.”
He thinks that virtually being down with the corals gave them ideas for further questions, which they might not have asked had they been shown only images or text.

There are a number of other ways VR is being used for education. Titans of Space, for example, is a resource for teaching students about the solar system, by which they can virtually tour the planets as astronauts.
Pupils can slide a smartphone into a cardboard headset.
Teachers at Penybont Primary School in Wales, for example, have used an app called Class VR to boost creativity in storytelling.
It can also be used as a tool to show children how an area looks during different times of the day, seasonal changes, or after a few years. This can be combined with real-life field trips to help illustrate environmental destruction, for example by demonstrating changes to flora and fauna, Minocha explains.

It’s not just teachers across the UK who have embraced VR. “The impact is pretty worldwide now,” Nash says.
He has seen a particularly keen interest in the Middle East, for example in Egypt and in the UAE, where teachers are “very passionate” about using this technology.
Are there any drawbacks? Teachers may want to use it sparingly, Parkinson notes. “The danger is that it’s just a novelty which you use because it might be fun, rather than a serious educational reason for doing it.”
This is why he plans to use seven or eight kits per class, in rotation. “You wouldn’t want to be looking more than a few minutes at a time, because some of the students said they felt a bit dizzy.”

AR brings the world into the classroom

The coming years will see more of this technology in schools. Next up is an augmented reality (AR) application which Google will be trying out in UK schools this fall.
With augmented reality, users hold up their phone or tablet to see virtual objects placed in the real world.
This will bring objects like tornadoes or meteorites into classrooms.
“AR is really great for letting you evaluate an object, and to get up close to it,” Shrom says.
He envisions this evolving into a combination of virtual and augmented realities.
“Over the long term we are thinking of the converging of these two things: VR and AR working with the teacher to provide an even more powerful set of tools.”
It seems both students and teachers will be traveling the world much more than before, from the comforts of their classroom. Source: CNN